If only a seat could talk, what great and exciting stories this one would tell. 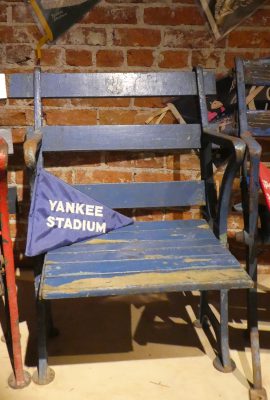 Over the years, occupants of  this marvelous artifact that you are looking at have witnessed some of the greatest players and greatest moments in the history of the wonderful game of baseball. For this seat was once located in the stands of Yankee Stadium, arguably the most iconic and storied sporting venue since the Roman Coliseum.

The origins of the stadium, and thereby of this humble yet prestigious seat, can be traced to an historic (and fortuitous if you are a Yankee fan) event in sports history.

In 1901 Ban Johnson, the president of the newly formed American League successfully petitioned to have the AL classified as a major league with the design and intention to peacefully co-exist with the already well-established National League.

Plans to add a team in New York City as a charter franchise of the AL were blocked by the NL’s New York Giants. A team was instead placed in Baltimore and named the Orioles. Due to several factors including player flight and low fan support, two years later the AL was granted permission to move the team to New York. The new team was named the New York Americans but were commonly referred to as The Highlanders and played their home games in the hastily built Hilltop Park in the Washington Heights neighborhood of Manhattan.

They would play there for the next 10 years until their lease expired after which they were moved to the Polo Grounds sharing residency with the New York Giants as their tenants.

The early Highlander teams were middling at best but had their share of notable players including first baseman ‘Prince Hal’ Chase (who had a better rapport with the bookmakers than with his teammates) and pitcher Jack Chesbro who’s 41 wins in 1901 is a record that is unmatchable as any other in the sport.

In the Winter of 1920, the team’s fortunes would forever change.
The Boston Red Sox had enjoyed considerable success over the past decade winning 4 World Championships from 1912-1918, but the team’s owner, Harry Frazee, had a much greater passion for theatre than he did baseball.

Determined to finance his latest production on Broadway, ‘No No Nannette’, Frazee sought to sell off some of his prized players to acquire the cash that he needed. No Red Sox player was more coveted than 24 year old Babe Ruth. Ruth had excelled for the Sox as a brilliant left-hand pitcher (he dominated the Cubs in the 1918 World Series winning 2 games) but was now coming into form as the best hitter in baseball as well. In 1919, Ruth hit 29 home runs setting the record for most ever in one season. 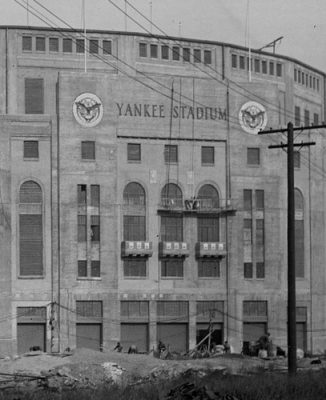 Giant owner Charles Stoneham and manager John McGraw became resentful over having to cede the spotlight of NY baseball, which the Giants had owned for decades, to the Yankees as well as drawing considerably less fans in their own stadium than them. In a spiteful move, a lease extension wasn’t offered to the Yankees who were now forced to look for other accommodations. The intent of the Giants was to see the Yankees exiled from Manhattan out to one of the underdeveloped and remote regions of the city.

The Yankees search for new quarters was supported by significant financial backing to build a new stadium, looking to cash in on the swelling fan base for Ruth and the Yankees.
The site that was ultimately chosen was 10-acre lumberyard in the Bronx right across the Harlem River from the Polo Grounds. This was an area ripe for expansion and development.

They broke ground on May 5, 1922 and less than a year later, the stadium was completed and dubbed “The House That Ruth Built”. The first game was played on April 18, 1923. There were 64,000 people in attendance who got to see Ruth hit the first ever HR in the new stadium as the Yankees defeated the Red Sox 4-1.

Fans flocked to the new stadium to see Ruth and the Yankees. They’d arrive by streetcar, trolly and (if they had the means) by taxi.

There is a wonderful scene in the 1928 silent film ‘Speedy’, where a New York City taxi driver (played by Harold Lloyd) drives recklessly through the streets of NY to deliver his passenger, Babe Ruth to Yankee Stadium to get to a game that he’s running late for. Later in the scene, Lloyd is in the stands sitting in a seat (maybe this very seat) and watches the Babe hit one into the upper deck. This was the first of many movies to feature Yankee Stadium.

This wonderful new stadium was befitting the great teams that it hosted. Seating was later expanded to a capacity of over 85,000. When the stadium was filled, it was a site to behold.

The architecture and engineering were a wide cut above the standards of the other ballparks of its time and the stadium had many notable and distinct features including the iconic façade, massive outfield dimensions (460’ in left center and 490’ in dead center – aka ‘Death Valley’) and monuments of great Yankee players in deep centerfield that were actually in the field of play.

The Yankees would go on to enjoy dominance in the league for the better part of their 80-year occupancy in their new stadium winning 37 AL pennants and 26 World Championships.
In this stadium and from this very seat, countless great events were witnessed and memories created.

From this seat, a lucky fan got to see the Babe hit 259 home runs, the final out of many World Series, Lou Gehrig’s heartbreaking farewell speech in 1939, Don Larsen’s perfect game against the Dodgers in the 1956 World Series, Reggie Jackson’s 3 home runs (on 3 swings) in game 6 of the 1977 World Series and so many more.

From this seat, many a fan got to witness the great play of Yankee legends like Ruth, Gehrig, Joe DiMaggio, Mickey Mantle, Yogi Berra, Whitey Ford and Derek Jeter.

In addition to baseball, an occupant of this seat got to witness Joe Louis knock out Max Schelling in 2 minutes back in 1938 in a heavyweight fight that carried a much greater significance than just a boxing match. They also witnessed the famous 1958 NFL title game where the Baltimore Colts beat the NY Giants in overtime on Alan Ameche’s touchdown. This game is largely considered by advocates and historians to have sparked a national interest in football that would eventually swell to make the sport the most popular in the country.
In addition to sports, this seat also provided a great vantage point for many concerts, rallies and 3 Papal Masses.

By the early 21st century, despite major renovations being made back in 1975, the stadium was falling into disrepair and was generally dated. Plans to build a new Yankee stadium directly across the street from this one were made and the new stadium was completed in time for the start of the 2009 season.

The final game at the old stadium was played on September 21, 2008 and the stadium was subsequently demolished in 2010 thus giving this wonderful seat a very well earned retirement where it is now here for you to enjoy along with all of the other great artifacts in this unique and special museum.

Great job on this great old ballpark! The old seats are wonderful reminders of these old places where so much history was made and now so many stories are retold.