Palace Of The Fans

Hello, my name is John T. Brush and I am the owner of the Cincinnati Reds. Today is August 12, 1902 and it has just been announced that I will be taking over the inside affairs of business for the New York Giants baseball club. This means that I will be leaving Cincinnati and the Reds at the end of the season. 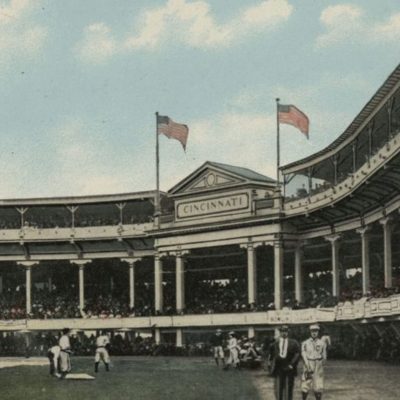 I understand that you would like some information about this new ballpark that I have built, known as the “Palace of the Fans”. Allow me to sit in one of these beautiful stadium seats and relax for a few minutes while we talk. You see, I have a condition known as locomotor ataxia which requires me to walk with 2 canes. I don’t move too fast, so it is nice to just sit back and relax and enjoy this ballpark, considered the finest in baseball.

We opened the stadium this year as a true luxury facility, a palace for those with the means. It has been a couple of years since a fire burned the main grandstand of League Park. We were able to keep the same location here at the corner of Findlay Street and Western Avenue. We built the new stadium on a concrete platform to help keep the fires away. It seats about 6,000 fans.

We wanted a facility that would make an impact here in Cincinnati. The ‘Palace of the Fans’ has carriage stalls at the bottom of the grandstand that are designed to give our fans direct access to these comfortable seats from their horse-drawn carriage. Nineteen “Fashion Boxes” keep our fans comfortable and close to the action.

Please take a moment to look at the stadium façade! It features 22 hand-carved Corinthian columns, with the look borrowed from the 1893 World’s Columbian Exposition (the so-called “White City” Court of Honor) in Chicago by our architect John G. Thurtle. In the center there is a large sign honoring the people of Cincinnati. It is truly a beautiful palace for baseball and I am going to miss it now that I will be moving to New York. Thanks for stopping by. It looks like my motor car is ready, so I am going to head that direction. Have a nice day! 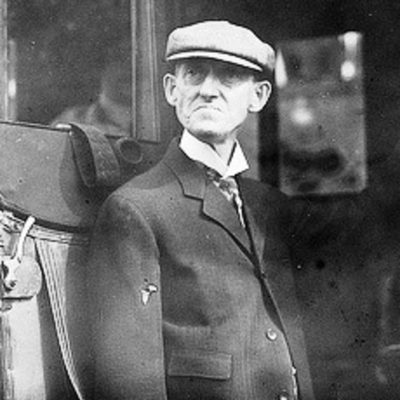 Interesting facts about ‘Palace of the Fans’: The architect Thurtle was obviously not a baseball fan: he included 19 “fashion boxes,” a precursor to today’s luxury suites, but failed to include dugouts or clubhouses.The ‘Rooters’ were placed underneath the grandstand, behind chicken wire, left to consume whiskey and beer while expressing their pleasure or displeasure with the game. The name ‘Palace of the Fans’ never really stuck, since the ballpark was built on the original League Park grounds, it was considered League Park II to many. The Reds only finished as high as 3rd place, while playing here. After a decade, many structural problems emerged, as well as a fire, leading team ownership to tear down the facility. Redland Field (aka Crosley Field) a true steel and concrete stadium, opened in 1912 at the same location.