In The Year of the Boar and Jackie Robinson

IN THE YEAR OF THE BOAR AND JACKIE ROBINSON
Written By: Bette Bao Lord, Illustrated by Marc Simont; Harper Collins; 1984

Shirley Temple Wong was not born “Shirley Temple Wong.” When we first meet her in Chapter 1, on page 1, she is called “Sixth Cousin.” As the story goes on, Shirley learns that she and her mother will be moving away from China to America to join her father. As she is leaving her grandfather proclaims that it is time for her to be given an official name. Sixth Cousin chooses Shirley Temple because she wants an American name and it is the only one she knows, other than Uncle Sam!

After moving to America Shirley begins to learn how hard it is to be an immigrant and non-English speaker in 1940’s America. She does not have many friends, and sh 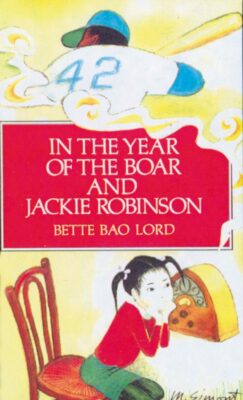 e struggles to understand what her teacher is teaching her for some time. It isn’t until Shirley stumbles into a game of “stickball” being played in the schoolyard that she gains a group of friends and a lifelong passion for the game of baseball. Shirley accidentally steals home and her new friends start to call her Jackie Robinson! The next day in class Shirley asks her teacher, Mrs. Rappaport, who Jackie Robinson is, and they have a wonderful discussion on baseball, Black Americans, and Jackie.

Mrs. Rappaport says it best when she says “In the life of our nation, each man is a citizen of the United States, but he has the right to pursue his own happiness. For no matter what his race, religion or creed, be he pauper or president, he has the right to speak his mind, to live as he wishes within the law, to elect our officials and stand for office, to excel.” “This year, Jackie Robinson is at bat. He stands for himself, for Americans of every hue, for an America that honors fair play.”

Shirley immediately idolizes Jackie and attaches herself to his cause, She understands that in America, she does not have to wait until she is older to be considered wise or prosperous. She also realizes that even though she doesn’t look like her classmates, she can do something great, just like Jackie!

Shirley rides out the highs and lows of the 1947 season with the Dodgers, while riding out her own highs and lows. This story does a great job of combining civics, history, social justice, and baseball, all while doing it in a child’s voice. It is a great read for anyone who wishes to understand a little more about that time and place in history. (Seriously, this 25 year old book reviewer couldn’t put it down!)