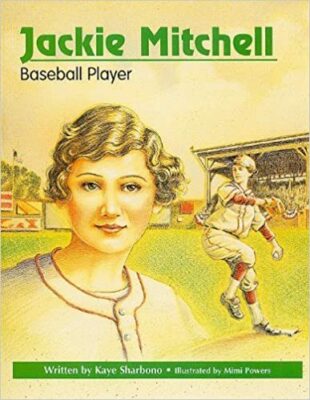 If you’re interested in learning more about Jackie Mitchell than just her famous outing against the New York Yankees, which you can read all about in our review of ” The Girl Who Struck Out Babe Ruth” this is the book for you! Jackie was much more than the girl who threw those pitches to Babe Ruth and Lou Gehrig. She was also mentored by a famous Major League pitcher, played for other teams, and went on to be a champion for women’s rights in sports.

Jackie was born in 1914 and she weighed only 3.5 pounds. Her doctors told her parents that in order to build her strength, they should keep her active. Her dad worked with her on the game of baseball, and she even got some help from their neighbor, the great Dazzy Vance. Before and after her big game playing for the Chattanooga Lookouts she played on an all women’s team, the Engelettes.

This short story provides an excellent base understanding of the amazing Jackie Mitchell, and her historic career in the game of baseball.