You Never Heard of Willie Mays?!

This book starts out as a homerun as you tilt the lenticular cover and watch Willy Mays hit one! Once inside, you find fascinating facts about Willy Mays growing up in Birmingham, AL, joining the Negro Baseball League at 15 years old, and running all the way to the major leagues. Then you follow him as a Giant, first in New York, and then in San Francisco, where he plays to everyone’s amazement and sets records along the way.

As you follow this game, “tickets” with pertinent facts are pasted on most pages. These “tickets” are your pass to deeper and more comprehensive information about the game, challenges faced with segregation, and Willie’s statistics. Terry Widener’s beautiful illustrations bring Willy Mays’ journey to life.

Our narrator, a Giants fan, shares how the team needed a miracle as Willie began his major league career. Hoping to become the next Joe DiMaggio, his hero, Willie played with everything he had to make winning plays for the Giants. His league play was interrupted for 2 years while he served in the U.S. Army. Baseball statisticians often wonder what his records would have been if he hadn’t been drafted.

In the end, even Joe DiMaggio admitted that “Willie had the best arm that ever was.” The Say Hey Kid is remembered for the records he set, some with great theatrics. His athleticism showed the world that skin color should not be the determinate of who could play. He changed baseball and the world in his own way.

For young ball players: the last 2 pages are filled with baseball terminology.

For everyone: enjoy the statistics, find out how the author and illustrator put this story together.

(Last 2 pages include: Author’s Note, Highlights of Willie Mays’s Career, Glossary of Baseball Terms, About the Statistics in this Book, A Note About the Radio Broadcast Quotes, About the Author and Illustrator)

Now that You’ve Heard of Willie Mays, do you think he is the best baseball player ever? 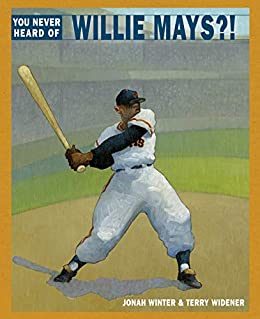 Also Search: Terry Widener on his sketches for the picture book You Never Heard of Willie Mays?