“Old Style heeeaah! Getcha icy cold Old Style, heeeahh!” You leap up out of the chair pictured above—it cracks and creaks from your sudden movement…you hold up your hands in the form of a peace sign…“Two!” “Two comin’… “8 bucks, buddy”… “Tenner comin’ back—keep the change”…[As the beer vendor walks away, it slowly fades in intensity “Old Style heeeahh…] …you slowly sit back down and the fragile wooden seat groans under the weight of a well-honed fish bowl of a beer belly…you settle back-in and try to refocus on the action on the field, asking your friend to your right… “What’d I miss?” “He walked Piacenti to get to Hellerstein.”

There is nothing more quintessentially Wrigley Field than that interaction…if you’ve ever caught the North Siders at the Friendly Confines, or maybe even caught the squad during Spring Training in Arizona, where the Old Style is shipped in to cater to Cubs fans’ tastes, Old Style and the Cubs seems like an institution; something that has always been—but has it always been this way? Let’s explore what this chair from the 1930’s would say, if it could tell tales of beer-fueled afternoons spent near the cooling winds of Lake Michigan.

In 1902, Old Style, produced by Heileman Brewing, came into existence. So, Old Style predates Wrigley Field. What’s more, although people like to claim that Wrigley opened in 1914, this is only partially true. In 1914, Weeghman Park opened and began the heralded history of what is now Wrigley Field—hosting the Whales and Federals of the now defunct Federal League. From 1920-1926 it was named Cubs Park. The Wrigley Company, known for its chewing gum, did not acquire the team until 1921, one year after Prohibition became the law of the land in 1920, and didn’t change the name to the eponymous Wrigley Field until 1927. Coming out of Wisconsin, Old Style was not widely available until the 1930’s and was certainly not associated with the Cubs until 1950 when they landed a sponsorship with the Cubbies, who hadn’t a pennant for five years.

But let’s return to our chair…from the 1930’s these chairs saw the tail end of one of the darkest times in US history—Prohibition. So, what’s a Cubs fan and a beer drinker to do at Cubs Park (1920-1926)/Wrigley Field (1927-Present) from 1920-1933 while the nation’s collective common sense went “dry” like the once-flowing beer taps? From 1920-1933 Heileman Brewing was busy turning Old Style into New Style, which was a non-alcoholic beer, but would a non-alcoholic beer suffice a baseball crank, livid about a terrible call in the top of the ninth, bringing the opposing team to a 4-3 advantage?!? Doubtful. This is where our story takes a decidedly spiritual turn. You see, before baseball existed at 1060 W. Addison, the site housed a seminary. That’s right. Religion. Just like baseball itself. This was the focus of life on the corners of Clark, Addison, Waveland, and Sheffield before baseball. The seminary was built for Rev. Revere Franklin Weidner, and now some say his ghost haunts Wrigley Field and more specifically the very seat you see above.

Allow me to explain. Although Prohibition was in effect, sacramental wines for church-related activities were exempt from the Volstead Act. So, under this very chair, which creaked and groaned with the spirit of Rev. Weidner, appeared a Prohibition-proof bottle of sacramental, completely legal wine. The Cubs faithful would religiously arrive everyday under God-given sunlight and blue skies and drink a blessed wine as a spiritual rite during the holy communion of baseball. This singular wine bottle was passed from person to person through the bleachers, miraculously inebriating hundreds if not thousands; part of a collective prayer for a Cubs victory each Sunday afternoon. The wine was so good, in fact, that it’s the reason why Ernie Banks, who autographed the chair, would say “let’s play two!” because the wine was still flowing. Today, the remnants of this miracle can be seen…in the vines that line the outfield wall, reminding us that miracles, like the one in 2016, can happen. 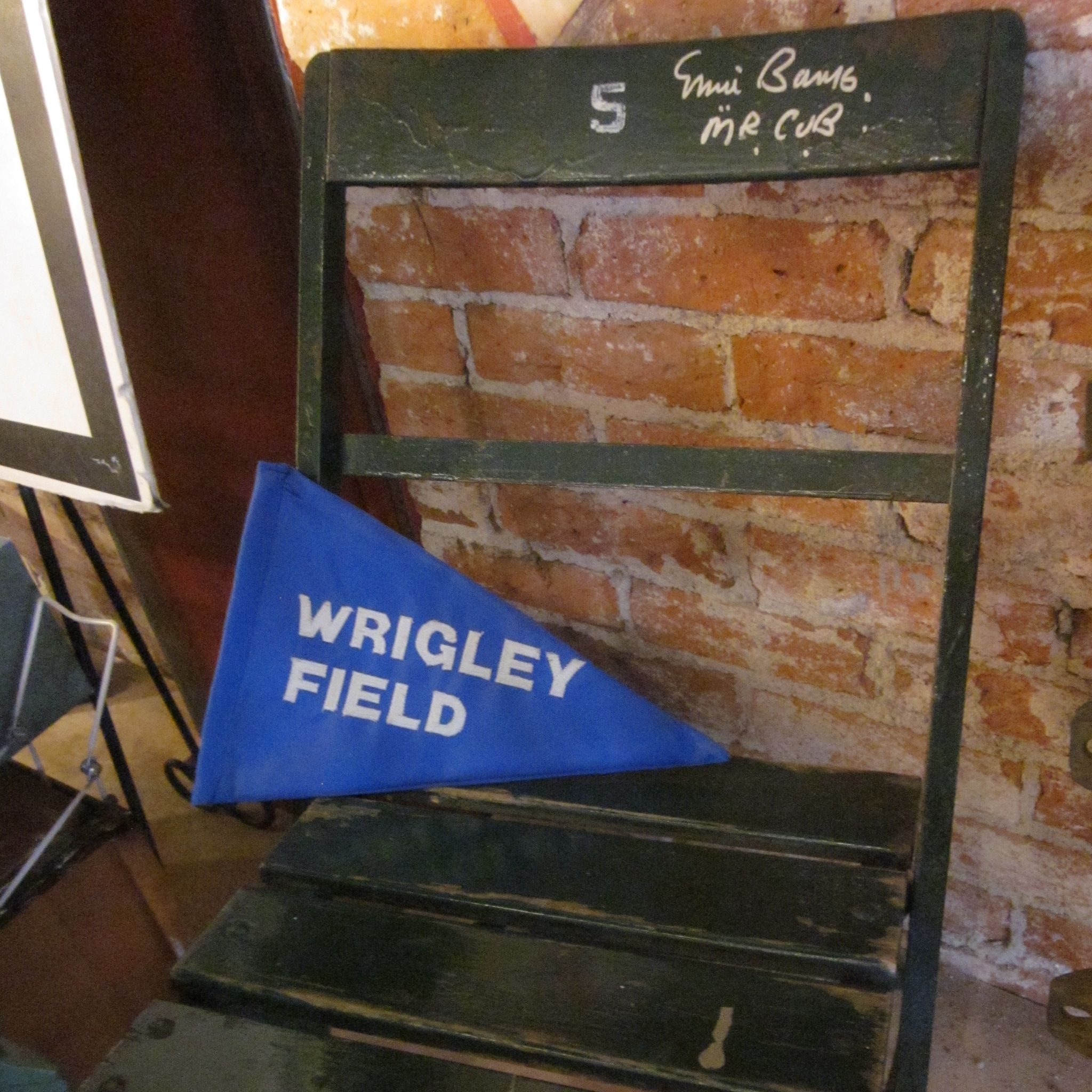 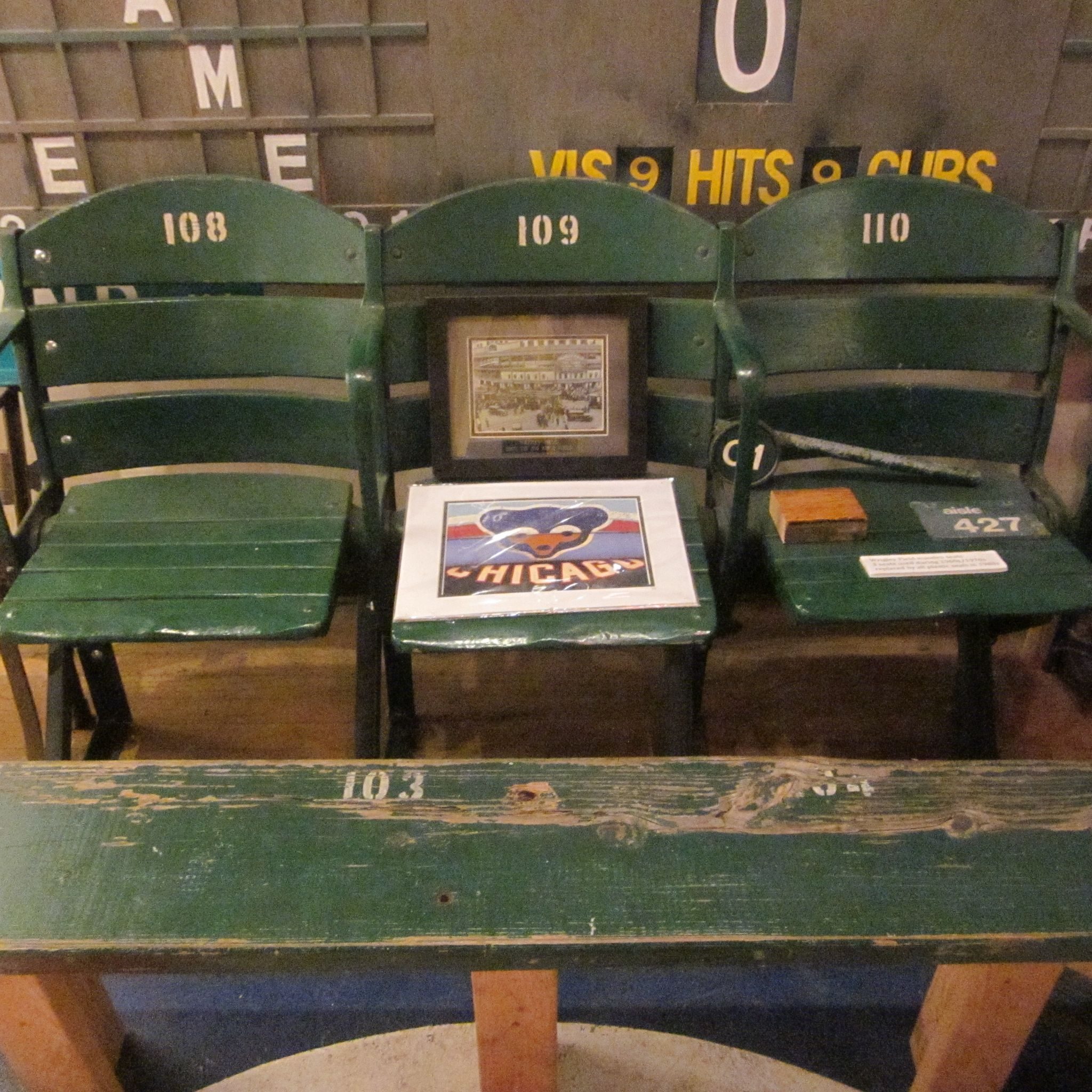