We Are The Ship

WE ARE THE SHIP: The Story of Negro League Baseball
By: Kadir Nelson, Paintings by Kadir Nelson; Jump at the Sun Hyperion; 2008

“We loved the game so much, we just looked past everything else. We were ballplayers. There was nothing we would have rather spent our time doing.” (pg. 29) 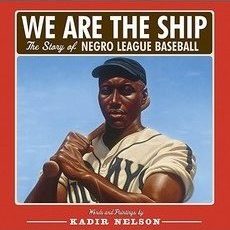 Kadir Nelson shares this engaging history through the eyes of an Every player narrator combined with his award winning oil paintings. He sets up a baseball game of ten innings as a means of disclosing the development of the Negro Leagues from its beginnings, progressing through the daily games and ending with Jackie Robinson breaking the color barrier by entering the Major League. What happens within those innings describes all the challenges these players faced when they said, “we just looked past everything else.” That included segregation, the practice of separate areas for blacks and whites, hatred, terrible ball field conditions, and low pay.

Ride the rickety bus as you travel to tomorrow’s game, sit in the bleachers and watch these talented athletes play with everything they have in order to win. Rules were few, outsmarting the other team was prime and tricky plans were instigated often. Listen to conversations between players like Satchel Paige and Chappy Gray.

After you meet Rube Foster, founder of the Negro National League and owner of the Chicago American Giants, you’ll understand the meaning of his words, “We are the ship; all else the sea.”

Buy “We Are the Ship” on hardcover

https://www.youtube.com/watch?v=JPiYmWH0oFc (Life in the Negro Leagues, There was Always Sun Shining Someplace)