This review is compatible with another review, Silent Star. Click here to read it!

Dreams do come true. From a slick rubber ball on the farm to the Cincinnati Reds, William Hoy’s baseball dream came true. In his youth, William practiced throwing a rubber ball at an “X” 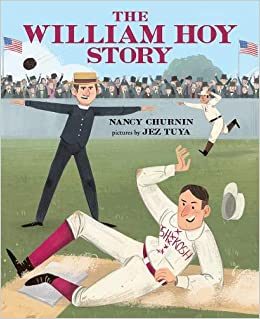 chalked onto the barn wall until he hit it. Following high school graduation, William was standing outside the cobbler shop where he fixed shoes, when a foul ball landed at his feet. He picked it up and because of the hundreds of throws at the “X”, threw it right into the hand of the waiting baseball player. Impressed with the throw, the player asked William if he’d like to join their amateur team. Since baseball was William’s first love, he agreed but then things began to happen.

Communicating with teammates and team owners was difficult because William could not hear or understand what they were saying – he was DEAF! Teammates and opposing players often made fun of him and tricked him, even calling him “Dummy,” a common name for deaf people. In the 1880’s, few people used sign language.

Batting was a frustrating experience because William did not know the ball count and ended up being K’d on several occasions. He thought about a solution which began with reminiscing about home and his mother raising her arms to celebrate his accomplishments. In sign language, that is the sign for applause. He began drawing pictures with labels for various calls like strike, ball, out, foul, then taught umpires how to use them. He was among the first to introduce hand signals to baseball.

William was a hero in the deaf community and became one of the most popular players in baseball. Accomplishment of his dream can be traced back to his determination and perseverance which began where “X” marked the spot!

[…] This review is compatible with another review, The William Hoy Story. Click here to read it! […]

Thanks for putting this up on dummy Hoy. 32 years of research and on contact with the author and this book has become a reality.