Written by guest author Jay Sandord. Jay also wrote a piece for our Extra Innings section, about Denver’s connection to the Negro Leagues.

“No home run will ever go over that Fence. This is the only field in the country on which you can play as absolutely fair game of ball without interference of fences.” Such were the sentiments of Ty Cobb when he was given a tour of Braves Field in Boston a few days before the ball park opened. Boston Braves owner, James Gaffney shared the great Gobb’s belief that hitting the ball over the fence should be a rare event in Major League baseball. Gaffney loved to see inside-the-park home runs and that is what he had in mind when he designed the dimensions of Braves Field. It was 402 feet down both the right-field and left-field foul lines. Center-field was a mere 520 feet from home plate and right-center was a distant 550 feet. The juiced up ball seen in the big leagues today would struggle to clear the fences of Braves Field. In fact, Mr. Cobb’s prediction was fairly accurate with only seven home runs leaving the ball park during the first thirteen seasons the park was open. Even more amazing is that 209 inside-the-park home runs were hit at Braves Field during that same time frame. James Gaffney must have been a happy man indeed. Prior to the opening of Fenway Park (1912) and Braves Field, the only continuous big-league park in Boston had been South End Grounds. This attractive old ball field was the home park to both Boston teams for forth four years from 1871 until 1914. Braves field was the eleventh of the new wave ball parks to be built in a short seven-year span from 1909 through 1915. New wave in the sense that they were made of steel and concrete replacing the previous wooden structures. The new ball parks also increased seating capacity substantially. Eleven new baseball fields are even more impressive considering that there were only eight National League and eight American League teams during that era. Mr. Gaffney was a developer and contractor by trade and managed the construction of his new ball park himself. He purchased the Landmark Allston Golf Club located about three miles from the heart of Boston’s downtown district and within walking distance of Fenway Park. Braves Field was bordered by Commonwealth Avenue, Babcock Street, Gaffney Street and railroad tracks that ran from left-field to center-field with the historic Charles River just beyond the railroad tracks. The new ball park cost James Gaffney the hefty sum of one million dollars (26 million today). His nearly one thousand workers completed the construction in just five months. The structure seated 40,000 (one source says 43,500) and consisted of four separate single-decked sections. The covered grandstand ran from beyond third base and curved around home plate and ran well beyond first base and seated 18,00 fans. The left-field and right-field sections seated 10,000 each. These two sections were bleacher seats (wooden planks) and offered no protection from the elements but they were ideal for getting a sunburn. The fourth section was a small area beyond the right-field wall that seated 2000 patrons. This section became affectionately known as the Jury Box. Legend has it that a Boston sports-writer looked out at right-field one afternoon and saw the section was only occupied by twelve lonely souls so from that day on, he dubbed it the Jury Box.

The Boston Braves of 1914 were called the “Miracle Braves” and rightfully so. On July 19, 1914, the team found themselves in last place in the National League standings but by season’s end they had captured the pennant and promptly swept the mighty Philadelphia Athletics in the World Series. To James Gaffney’s dismay, his 1914 team played their games at South End Grounds with the smallest seating capacity in Major League baseball. The determined Mr. Gaffney corrected this problem. When he opened his new baseball palace on August 18, 1915, he had the largest seating capacity in all of baseball. Braves Field hosted the World Series that Inaugural season in 1915 and again in 1916. That is the good news. The bad news is that both years it was the Boston Red Sox winning the World Series there. James Gaffney was nothing if not a savvy businessman. He rented out his new ball park to the Red Sox for the two series since the Braves Field had a considerably larger number of seats than Fenway Park. The Red Sox also rented Braves Field for week-end games from 1929-1932 for the same reason. Sadly for Gaffney and Braves’ fans, his ball club did not win another pennant for thirty four years.

When Braves Field opened its gates that day in August 1915, it was an event worthy of 21st century marketing. Attendance that day broke all attendance records to date. Nearly 55,000 fans found their way into the state-of-the-art facility that afternoon and no one was disappointed from the pomp and circumstance to the ball game’s result. National League president and former pitcher, John Tener raised the 1914 pennant on the outfield flag pole. Hall of Fame member, Clark Griffith threw out the first pitch. Braves manager, George Stallings was the catcher and Miller Huggins (H.O.F. 64’) was in the batter’s box for the ceremonial pitch. Braves’ second baseman and future Hall of Famer, Rabbit Maranville drove in the first run at Braves Field as Boston defeated the Cardinals 3-1 on that historic day. By 1928 Boston fans were weary of losing and wanted to see more home runs than spacious Braves Field allowed. In response, team president, Judge Emil Fuchs started to shorten the distance to the outfield fences. From that year on, fence adjustments became nearly an annual occurrence. Regardless of this accommodation, the Braves Ball Cub rarely contended for the pennant. In a desperate attempt to draw fans, the Boston Club changed their name from the Braves to the Bees and they changed the name from Braves Field to National League Park which sports writers promptly nicknamed The Beehive. These changes remained in place from 1936 – 1940, when the organization changed the names back to the Boston Braves and Braves Field. Even with wins hard to come by, Braves Field always managed to offer it’s fans an array of talent to see when they came to the ball park. No less than eighteen Hall of Fame players took the field for the Boston Braves. Imagine seeing Babe Ruth, Rogers Hornsby, Warren Spahn, George Sisler and the Waner brothers all wearing the home town flannels. In addition, Hall of Fame managers Bill McKechnie and Casey Stengel took their turn leading team from the dugout. To top off the era, the Great Christy Mathewson was the Braves president for three seasons. The Braves had a resurgence during the 1940’s. Tommy Holmes set a, then record, thirty seven game hitting streak that excited Boston fans in 1942 and Bob Elliott won the National League M.V.P. award in 1945 and again in 1947. Attendance during this time began to grow again at Braves field when the Braves won the pennant in 1948, due in large part to the excellent pitching of Warren Spahn and Johnnie Sain. Those who are old enough may remember the chant “Spahn and Sain and pray for rain”. Braves Field set it’s attendance record in 1948 when 1.5 million fans passed through the park’s turnstyles. The Braves lost in the World Series that season to Bob Feller and the Cleveland Indians.

As the lives of ball parks were once measured, Braves Field had a reasonably short life of thirty-seven years. The ballpark’s tenure came to an end abruptly following the 1952 season when attendance was only 281,172. The Boston Braves went to spring training in 1953 and while there, the team moved the franchise to Milwaukee. This stunned the baseball world since no Major League team had changed cities for fifty years. Little did anyone at Braves Field on September 21, 1952 realize they were witnessing the last big league game being played at Braves Field as the Brooklyn Dodgers defeated the Braves 8-2. Boston University purchased Braves Field from the Braves organization for $500,000 and turned it into a football field where the Boston University Terriers play their games and named it Nickerson Field. The right-field pavilion of Braves Field still remains as part of the football stadium but the ads for Philco Radios, Calvert Whiskey, Gem Razor Blades and Peters Used Cars that appeared on the left-field and center-field walls are gone. So are the concession stands where the aroma of steamed clam, fried clams, hot pastrami sandwiches and baked beans filled the air.

Colorado has a connection to Braves Field/Nickerson Field. On September 9, 1960, history was made when the first American Football League game was played on that field. The fledgling Denver Broncos defeated the Boston Patriots that evening. 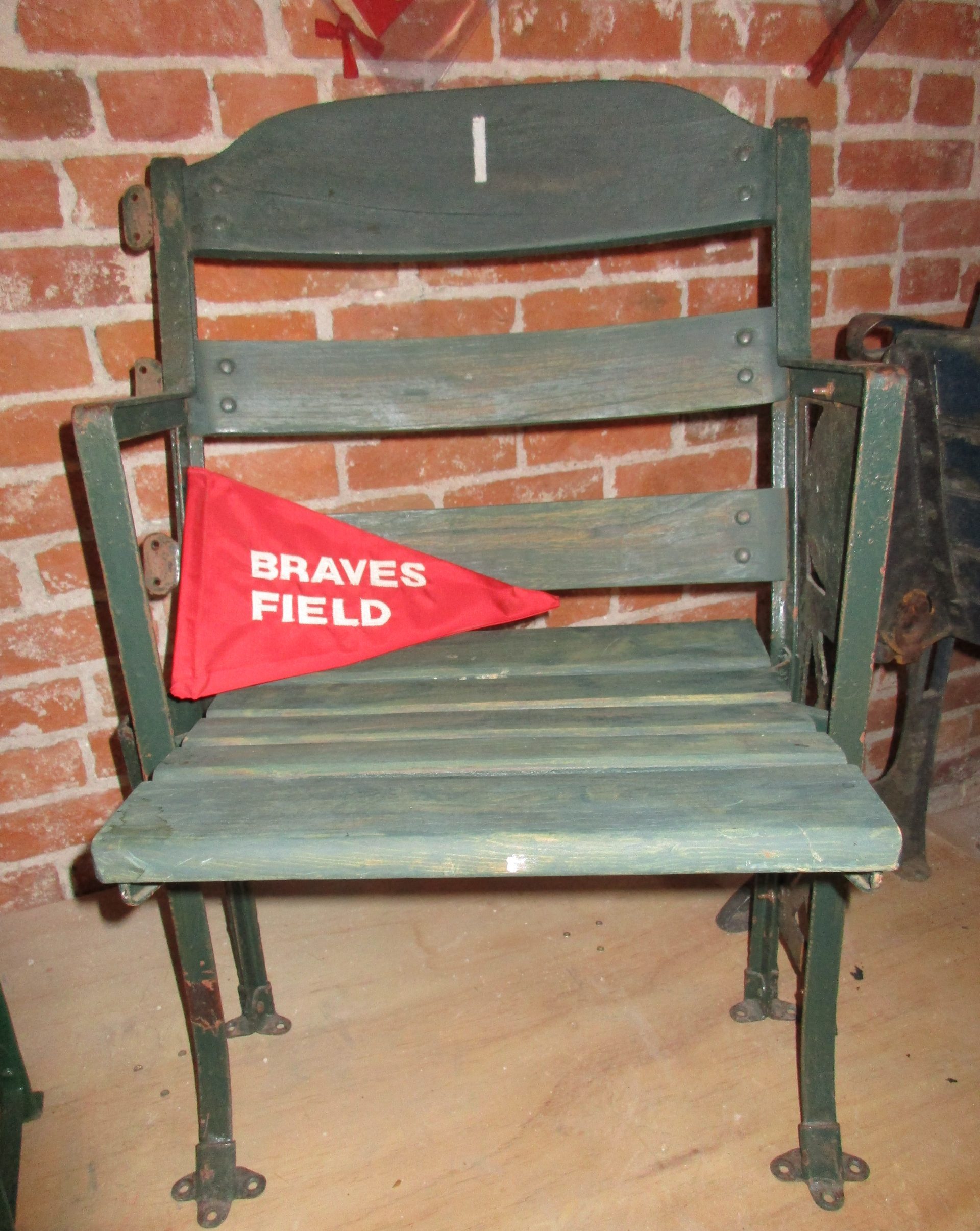