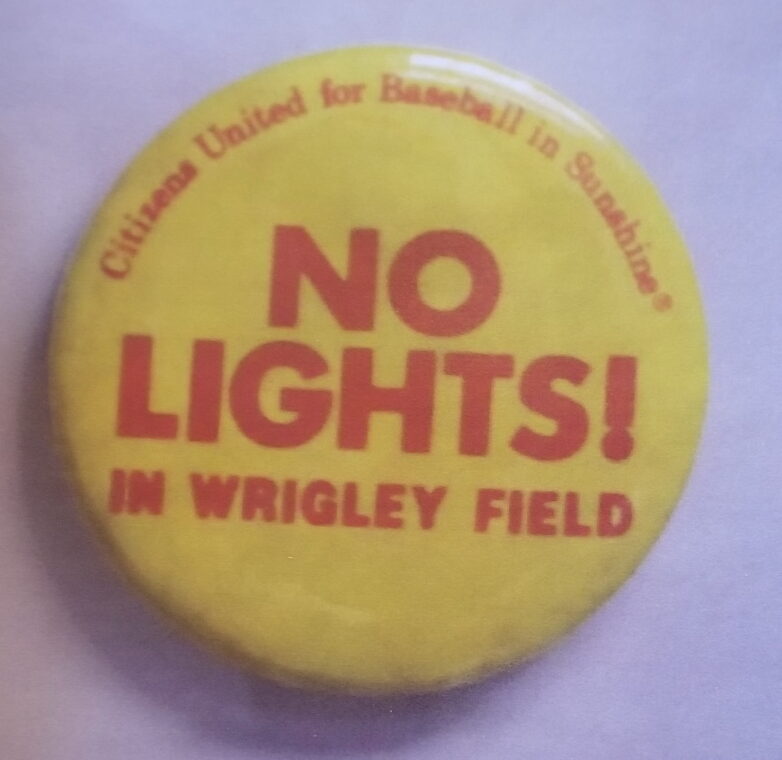 This weekend, baseball fans will converge upon Coors Field to see the Rockies take home a victory against the visiting Chicago Cubs. Visitors can also converge upon the National Ballpark Museum and take home a piece of Cubs’ history.

The museum, located one block from Coors Field, received a donation of rare button-badges, which they will sell on a first-come first-serve basis. Emblazoned with the acronym “C.U.B.S.,” the buttons played a major role in an infamous battle between Chicago residents and Wrigley Field. The button-donor heralded from Lakeview, the residential borough that surrounds the historic ballpark.

The museum will charge $19.88 per button—a “tip of the ballcap” to 1988, the year of the first Wrigley Field night game. That price includes museum admission. Buttons will be available in limited supply for the duration of the Rockies-Cubs series, April 14-17.

“C.U.B.S.” stood for “Citizens United for Baseball in Sunshine.” Until the late 1980s, the “Friendly Confines” were also the lightless confines—a minority among major league ballparks. A grassroots coalition of Lakeview residents, C.U.B.S. feared that night games would increase traffic and create late- evening chaos as intoxicated fans stumbled through their neighborhood. C.U.B.S. used these now-iconic buttons as bullhorns, successfully lobbying Chicago’s City Council and the state legislature to keep the lights out of Wrigley.

“C.U.B.S. versus Cubs” made it all the way to the Illinois Supreme Court, which sided with residents. However, addition legal wrangling permitted the ballclub to light up their field. The fight ended with a futile protest on August 8, 1988, the eve of what was supposed to be the Cubs’ first night game.

Despite Chicago’s “Great Drought” that sum-mer, the Lakeview skies opened several innings into the game. The drenched C.U.B.S. disbanded shortly after.

The Baseball Hall of Fame retained one of the organization’s t-shirts. Few can be found among memorabilia collectors. Remaining C.U.B.S. buttons were thought to have been destroyed or discarded—until now.