Louis happened upon the game of baseball one day in 1884, while paddling down the river near his family home on the Penobscot Indian reservation in Maine. He not 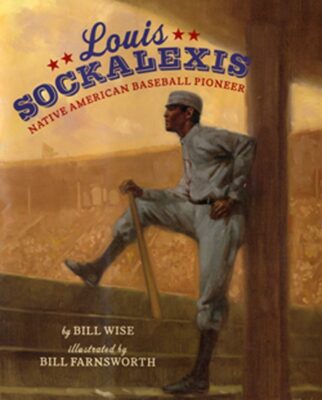 iced some kids playing with a stick and a ball so he parked his canoe and joined them. From then on, all he could dream about was baseball. He was hooked!

As a teenager, he attended a Catholic high school where sports were part of the curriculum. His skill attracted attention as he displayed his talents hitting, throwing and speed. Also, he answered insults with homeruns.

After high school, he attended Holy Cross College in Massachusetts and continued showing his great talents on the ball field but the verbal cruelty continued. When the manager of the Cleveland Spiders, Pat Tebeau, saw how Louis could perform, he offered him a contract. Louis’ father was against him joining this traveling team because he felt Louis’ place was on the reservation with his people. Despite knowing this, Louis joined the team but faced more jeering and discrimination, even from his teammates.

His signature day came on June 18, 1897, when the Polo Grounds stands were packed with fans who came to watch The Spiders play the Giants in New York. It is also a history making game because a rookie Spider, Louis, faced off against the Giants pitcher, Amos Rusie, the strikeout king. Read the story to find out how the staring match between Louis and Amos turns out, and Louis’ surprise when he glanced down the left field line. Could he prove this game was not just for white men?

The illustrations show all the highs and lows of Louis’ youth and his concentration and anticipation of those pitches from Amos at the Polo Grounds. Louis Sockalexis offers us a great lesson in perseverance, tolerance and acceptance as he became the first Native American to play professional baseball.