For those of you looking to expand your knowledge of the original ballparks of Major League Baseball, or at least add to your “Cliff Claven” (think TV Show Cheers) repertoire of baseball facts, Griffith Stadium is as rich a choice as any.

The venue was built in 1911 on the corners of Georgia Avenue and 5th Street (Left Field) and W Street and Florida Avenue NW (Right Field) in downtown Washington, D.C. Originally named National Park (1911-1922), and then for a short period American League Park, it was finally renamed for Washington Senators majority owner Clark Griffith in 1923. Griffith Stadium would be its name through the end of its multi-purpose sports usage in 1960.

Griffith Stadium has its own vignette within the National Ballpark Museum, comprised of memorabilia from, and associated with, the park and its history. Embedded within the collection of baseball goodies are two fascinating wooden stadium seats. Once you get past how uncomfortable they no doubt were, it’s pure nostalgic fun to transport yourself back in time and think about the many events these two seats must have enjoyed! Griffith Stadium’s rich history of sports team occupants included more than a dozen professional and amateur franchises, including the Washington Redskins (Football), The Homestead Grays (Baseball’s Negro Leagues) and the first of the Washington Senators Major League Baseball Clubs. Patrons sitting in these authenticated ballpark seats would have seen Josh Gibson and Satchel Paige play during Negro League competition. Sammy Baugh and Sonny Jurgensen during Redskins home games. Babe Ruth, Lou Gehrig, Walter “Big Train” Johnson, Mickey Mantle and Ted Williams, all while enjoying the nation’s pastime. It is more than likely that any American League, National Football League, and Negro League Hall of Famer, who played before 1965 graced the field at Griffith Stadium at some point in their career.

Though the two wooden seats on display at the museum were situated among some thirty thousand within the park, no seat held the notoriety as the one reserved for The President of the United States at each home opener. The ritual of the opening day first pitch at the nation’s capital dates back to the Taft administration. Each President from Taft to John F. Kennedy tossed the horsehide to a Senators player to kick-off the hopes and dreams of a season anew. A special box was created near the Senator’s dug-out from which the then President would make his toss. There are no records on file noting a given President’s toss velocity or the pitch he preferred most often. William Howard Taft is said to be the largest Commander in Chief to do the honors, weighing in at over 300 pounds. The pitch continued through baseball’s last season at Griffith in 1961. For those who enjoy Presidential-baseball-fun facts, it should be noted that President John F. Kennedy threw out the first pitch in 1962 for a new Washington Senator team, in a newer ballpark, with a new owner. Later that year, the Senators would have a roster player named John Kennedy. You could spend a doubleheader (if they still played those) contemplating the likelihood of previous or future President-Baseball Roster Player namesake fun facts.In the fifty some years (1911–1960) of the original Washington Senators franchise, they were blessed with a bounty of great players. In 1961 the franchise moved to Minnesota and became the Twins. In looking at franchise record leaders today, many of the Senators players from the 1920’s through 1940’s are still top ranked career statistical team leaders today, among them is outfielder Sam Rice, who either leads or is among the top five in most every hitting category.

Of the many great players, however, few were as dominant in their Senator career as the aforementioned pitcher Walter Johnson. Johnson spent his entire twenty-one year career in Washington. He amassed 417 wins in his career (second only to Cy Young at 511). For stat-gurus who often wonder if we will see another 300 game winner in Major League Baseball, you can be assured we will not see another 400 game winner. Johnson’s career ERA was 2.17 (some references have it even lower). On his home turf, he took clear advantage of the pitcher friendly park, amassing 233 of his wins 417 wins with a home field ERA of 1.50.Johnson was not a slouch! When on the road, he earned 184 wins in opponents with an ERA of less than 2.00. In addition to his pitching prowess, he carried two great nicknames, “Barney” and “The Big Train”. Perhaps the runner-up in baseball’s annual Cy Young award voting should get the “Barney” or “Big Train” award?!

Team and Stadium owner Clark Griffith tried numerous ways to give his team a home field advantage. For example, left and right field poles were originally more than 400 feet from home plate, and, first base was sloped slightly downward from home plate to help batters to beat out infield throws (Griffith had not thought through that being an advantage to visiting teams also!). The outfield walls were not only quite a distance from home, but featured a wall and a scoreboard that stood fifty and thirty feet each, and were considered “in-play”. The wall in center field had an adjunct design feature which was required because a hold-out homeowner would not sell during stadium construction. These home field “tricks” and “work-arounds” were to no avail, as the Senators produced just eighteen winning seasons during their tenure at the park. For “stat-lovers” you may find it interesting that Babe Ruth hit fewer home runs at Griffith Stadium than any park he visited as a player. Oddly, he had a very high number of triples. His propensity for three bag hits is likely due to his ability to lace line drives throughout the outfield alleys, versus any notion that the “Bambino” was suddenly “fleet of foot”!

In the early 1950’s, as patriarch Clark Griffith ceded power to his nephew Calvin, the walls were moved in twenty to thirty feet each. The timing of this move was perfectly aligned with the contribution of key team veterans like Jim Lemon and Roy Sievers and the emergence of young prospects like Bob Allison and Harmon Killebrew. All took advantage of the new stadium dimensions, but so did opponents. The shift to shorter fences did not help in the last five years the club played at Griffith, they won an average of just 62 games a season while losing an average of 92. They were just slightly better at home during that time than on the road. In total, they celebrated only three winning seasons from between 1937 to 1960.To start the 1961 season, the Washington Senators of 1911-1960, would now call Minneapolis-St.Paul home. Declining attendance, and the Redskins decision to move across town, made the younger Griffith’s decision to move to the Midwest an easy one. Hard to argue with his decision, the team would enjoy more success at the gate and more success on the field in their first decade in Minnesota than they had in the final three decades in Washington D.C. All of the team’s veterans, and particularly the young prospects (becoming veterans as well), had truly hit their stride.In rare form for Major League Baseball, Washington, D.C. (and Griffith Stadium) quickly had new occupants to begin the 1961 season. League expansion brought a new team, a new owner, and twenty percent fewer fans than the last season of the former club. The newest incarnation of a Washington, D.C. franchise met with no greater success than its predecessor. They too would come to the conclusion after eleven campaigns (with just one winning season) that a new location would be better. At the beginning of the 1971 season, they would reside in Texas and be called the Rangers.

So, back to those wooden stadium seats! Despite all the boardroom drama surrounding which teams were leaving, and which were arriving, the seats remained a constant presence in an aging cathedral of baseball and sports history. Those magnificent seats saw a lot, a ceremonial pitch from Franklin D. Roosevelt, Connie Mack managing more than five hundred games as an opposing manager, James “Cool Papa” Bell’s incredible speed, Jackie Robinson as an All-Star, and Jim Brown setting NFL rushing records. What a gift these seats were, offering themselves to lucky fans who could escape the events of the day, while enjoying incredible on field performances. 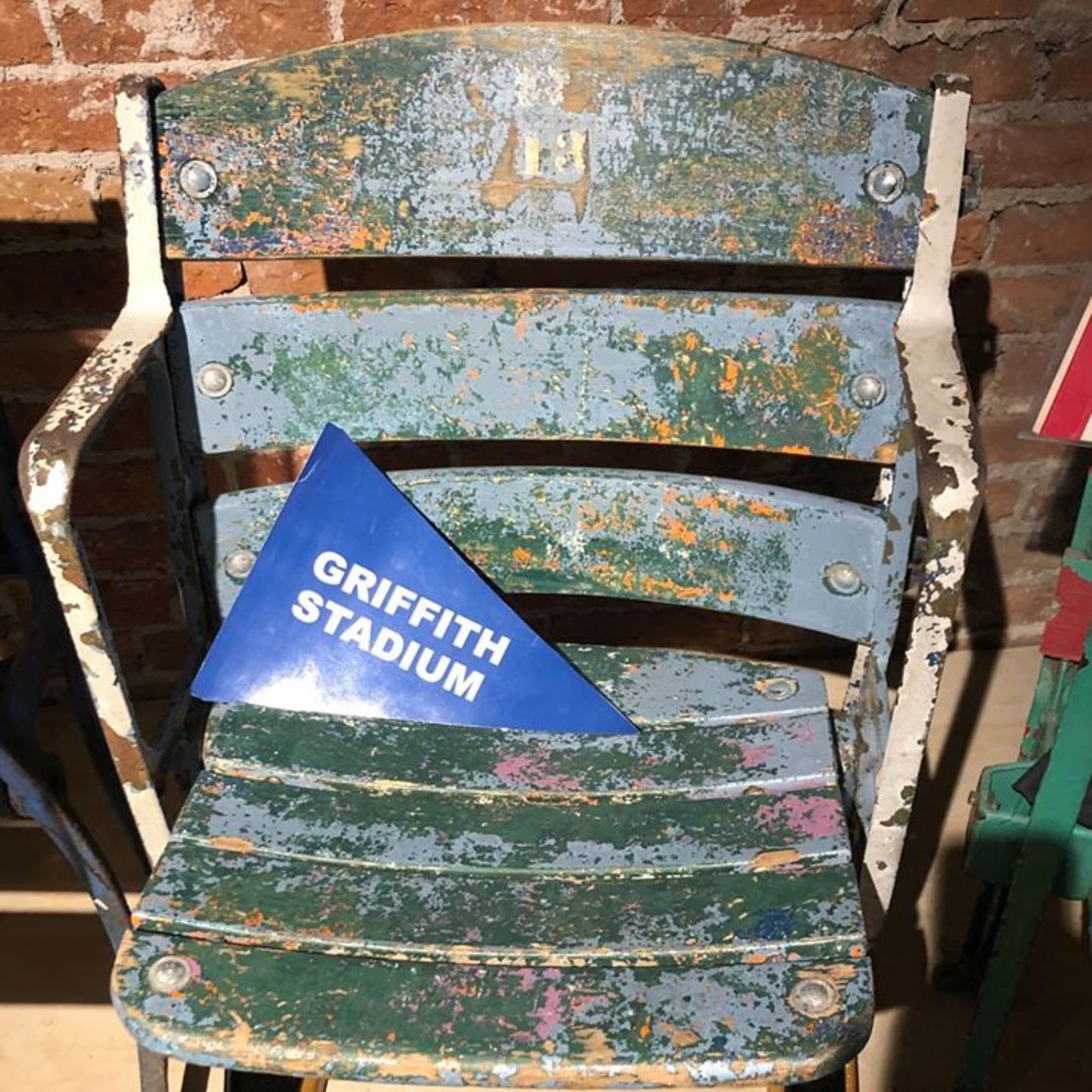 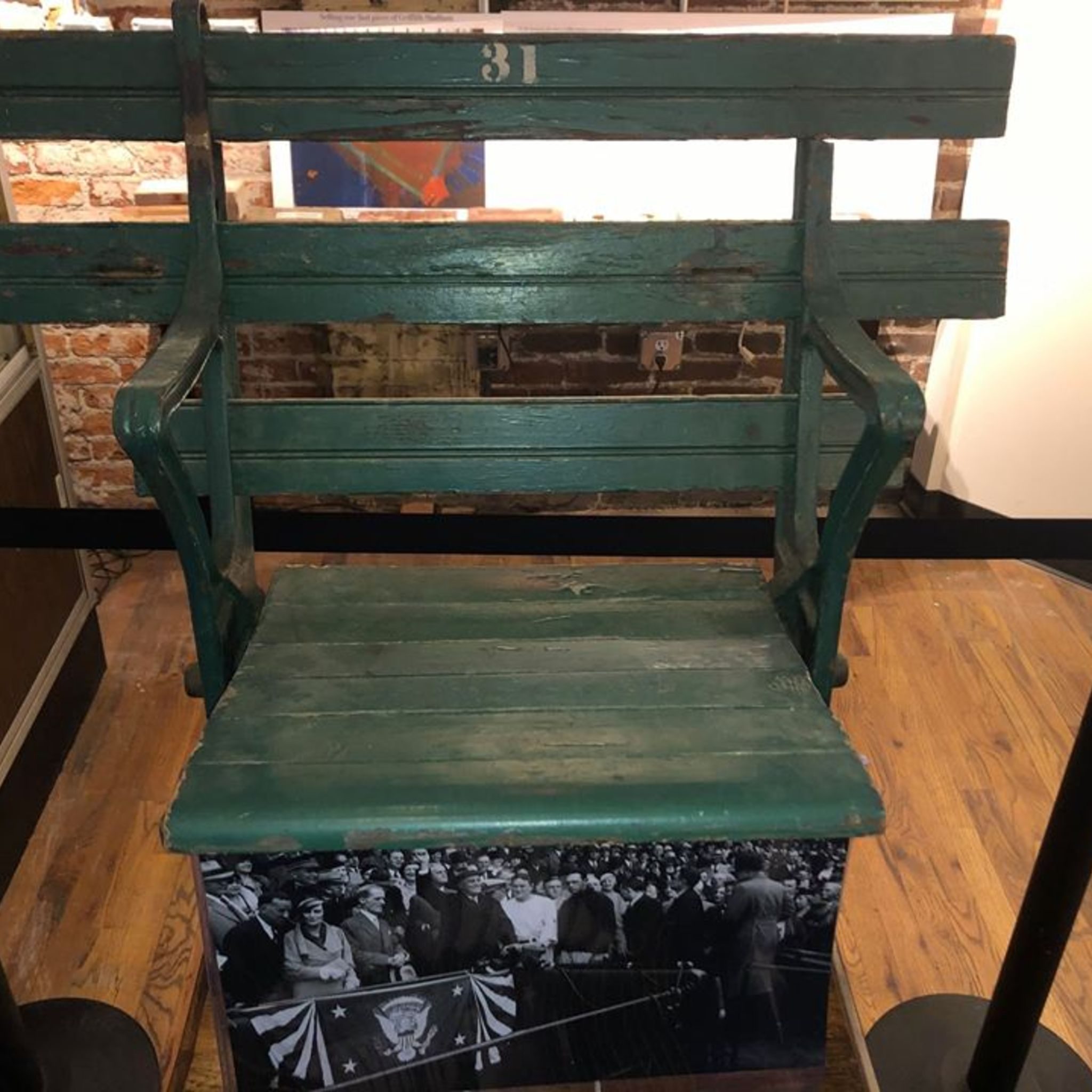 Some fun facts about Griffith Stadium:

Notes: Every President from William Howard Taft to John F. Kennedy threw a ceremonial pitch at least once at Griffith Stadium